KARACHI: Sindh’s overall COVID-19 fatality tally surpassed 1,100 on June 22 when the health authorities confirmed deaths of another 14 patients, including 13 having occurred at Karachi, during the last 24 hours, with detection of 1,464 new infections, which pushed the overall provincial infection tally to 71,092.
According to official data, the province witnessed the fatality tally growing to 916 on June 17 and 1,048 on June 20, which increased to 1,103 on June 22, meaning that Sindh lost an average of 37 lives of its 37 residents every day to corona during the last five days.
Astonishingly, the provincial health department has stopped mentioning the places where these patients succumbed to the lethal virus or the medical briefs of the deceased. 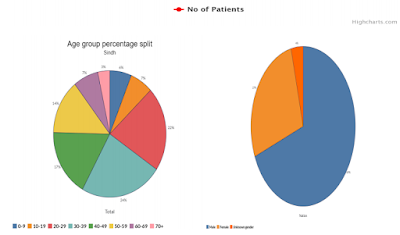 A data updated on June 17 suggested that over 80% of the COVID-19 patients, belonging to all age and income group, were losing lives in government and private health settings.
Overall, the maximum of 107 deaths occurred at Jinnah Postgraduate Medical Centre, followed by Sindh Institute of Urology and Transplantation (95), Dow University Hospital (88), Civil Hospital Karachi (85), Aga Khan University Hospital (80), Indus Hospital (72), Ziauddin Hospital (51), Lyari General Hospital (27), SMBB Trauma Centre (23), PNS Shifa (15), Liaquat University of Health and Medical Sciences Hospital (22) and other hospitals.
The health department summary revealed that 13 patients who lost their lives during the last 24 hours ending at 9 am on June 22 included nine men, aged from 24 to 82 years, and four female living in the age brackets of 30 to 55 years. In addition, Larkana registered death of 50-year-old woman.

It was learnt that, among the patients who lost their lives on June 21, there were four who died during the home isolation.
Karachi continued to report the maximum new cases and there were 1,171 more on June 22, followed by Ghotki (48), Sukkur (39), Larkana (36), Sanghar (32), Mirpurkhas (26), Khairpur (25), Dadu (15), Naushero Feroze (11), Jamshoro (9), Sujawal (9), Shaheed Benazirabad (8), Umerkot (7), Shikarpur (7), Tando Allahyar (4), Matiari (4), Kambar Shahdadkot (3) and Tando Mohammad Khan (1).
Different laboratories tested 9,841 samples collected from across the province on June 22, against a combined capacity of testing 13,650. A comparative study of case reports revealed that the new infection rate dropped to 15% on June 22, against 16% on June 21 and 20% on June 20.
Keen observers attributed the decrease in new infection rate to lesser sampling. When more focused or symptomatic patients were being tested, higher number of positive cases were detected but at the same time the positive cases diluted when mixed with randomly taken samples along, remarked an observer, adding that it was too early to see draw a conclusion about the trend in the testing of samples.
At Karachi, the ratio of COVID-19 infected males and females came as 69:28, against the overall male-female provincial ratio of 69:27–PNFS