KARACHI: Sindh witnessed an extraordinary reduction in its daily testing of samples for COVID-19 on June 23, when the authorities in the government confirmed another 1,564 new cases, with 21 related deaths. 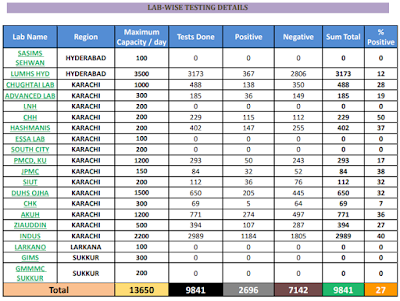 Sindh in the shape of 19 designated laboratories, being run in the public or private sector, has the collective capacity of conducting 13,659 samples every day, but the information suggested the laboratories were not utilized fully, as only 48.32% of the capacity tests were done, with a COVID-19 positivity rate of 24%, during the last 24 hours ending at 9 am on June 23.

Earlier on June 22 the designated laboratories and centres tested 9,841 (72%) samples, with a positivity rate of 27%. There was no statement about this sudden drop in the number of tests.
Astonishing, the Sindh health department was also unable to issue its routine COVID-19 summary, which usually had been telling about the relevant deaths, in addition to other information, though observers for long have been stressing for establishment of a provincial data and updates web portal, which could easily be accessed to.
The Sindh Chief Minister, Syed Murad Ali Shah, in his routine COVID-19 statement, informed that 1,564 new cases were found out of 6,597 tests conducted during the last 24 hours, pushing the tally of the infected persons to 72,656.
In all 395,287 people have been tested so far. Without giving break-up, he further confirmed that 21 COVID-19 patients lost their lives across the province, taking the total number of deceased persons to 1,124 for the province, while 1,352 patients having recovered from the disease during the last 24 hours.  He said that 614 patients were hospitalized in critical condition, including 118 on ventilators.

In the meantime, a federal health ministry data revealed that as of June 22, the total number of healthcare workers infected with COVID-19 in Sindh was 1,323, including 967 doctors, 117 nurses, 239 other health staff. 251 of them had contracted the virus while performing critical care duties while the remaining professionals were engaged in duties elsewhere.
Of the infected Sindh healthcare workers, 541 were kept in home isolation, 59 in hospitals, 57 were stable while two were put on ventilators. The number of the health workers having recovered from the disease was 702 so far, while 21 succumbed to the disease–PNFS