KARACHI: The Sindh Institute of Urology and Transplantation (SIUT) is likely to launch a 12-machine dialysis facility for kidney patients operational at Larkana next month. 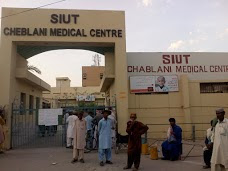 An officer of the institute revealed that the dialysis unit in question, an extended part of SIUT Chablani Medical Centre of Sukkur, as per plan, will start functioning in the mid of August and it was expected that it would carry out 100,000 dialysis sessions to some 950 patients living in Larkana and its adjoining areas on a yearly basis.

“Twelve dialysis machines have already been transported to Larkana, which will now be put for trial testing for a period of two weeks. Patients’ monitors required for high dependency unit are in process of being installed while facilities of radiology and pathology are also in the final stages,” it was disclosed.
The officer further informed that the water purification system by reverse osmosis has already been installed and it would also be ready for use in weeks’ time. “The drainage system which is a project of the local government is also in final stages.”
About the SIUT’s Chablani centre, he said that it was a full-fledged hospital with in-patient and outpatient services, having operation theatres, 24-hour dialysis unit, lithotripsy, laboratory and radiology services to thousands of patients yearly for more than a decade–PNFS